​In November 2018 Paul was approached by a private client to put ideas together for a bespoke trophy that was to be entitled ‘The Airborne Initiative Trophy’. It was to have the elements of the ascension of flight together with depicting parachutists descending to a precise location. By Spring 2019 Paul had made a simple maquette to show to the client what he had in mind. The idea put forward was received with great enthusiasm and was given the go ahead to proceed. The trophy/sculpture was to be made in sterling silver with 9ct yellow gold detail and once the sterling sheet had arrived, Paul set about the task of making the central tapered support arm that was to hold the small Dakota aircraft at its topmost point. The arm supported two parachutists as they descended, the parachutists themselves being individually carved by myself in wax and then cast into solid 9ct yellow gold. They were suspended by coated silver thread to the hand formed silver parachute canopies. The support arm was then attached to a raised sterling silver circular platform signifying an RAF roundel with a solid 9ct yellow gold centre disc to which the parachutists were attached as if landing on target. The whole sculpture was then mounted to a green Cumbrian slate base that he commissioned from one of the few slate cutters left in the UK. The title of the trophy ‘The Airborne Initiative Trophy’, was hand engraved by Paul around the sterling silver roundel. The sculpture stands 14” in height and is housed in its own bespoke solid English oak hinged case. 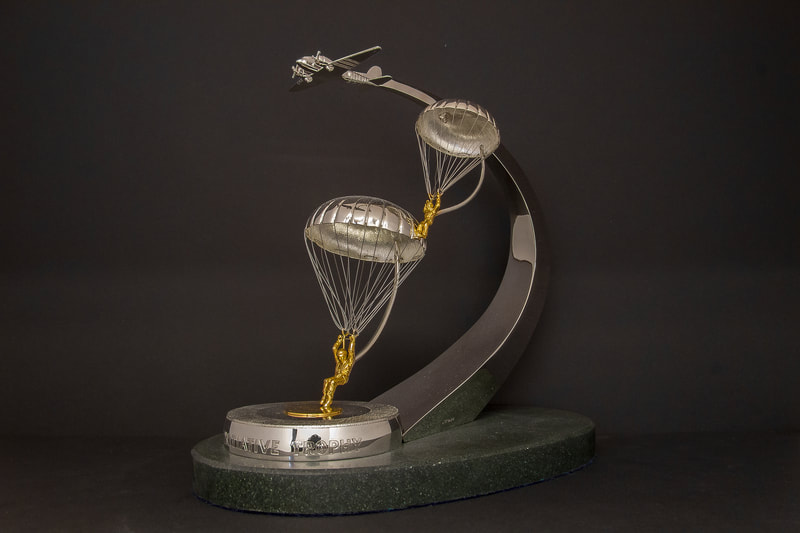 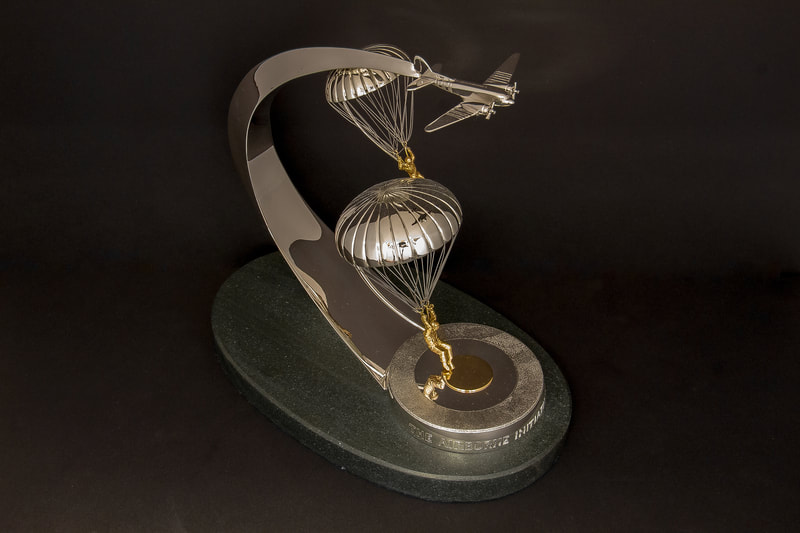 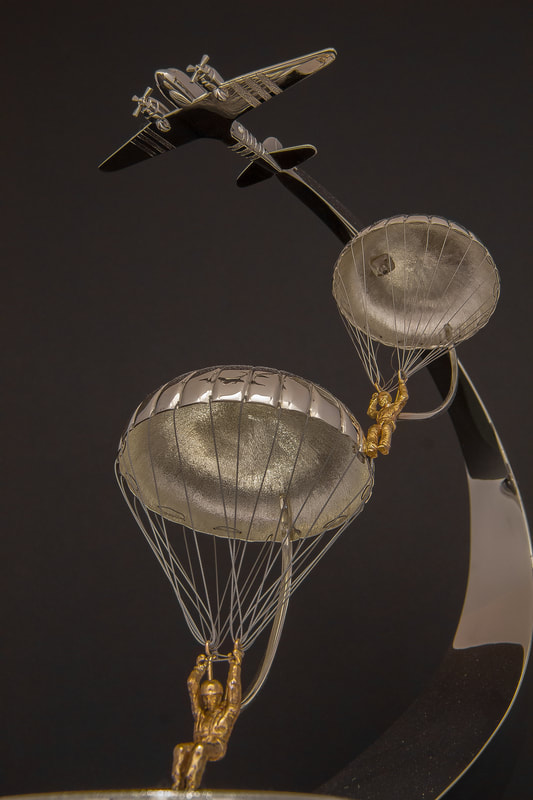 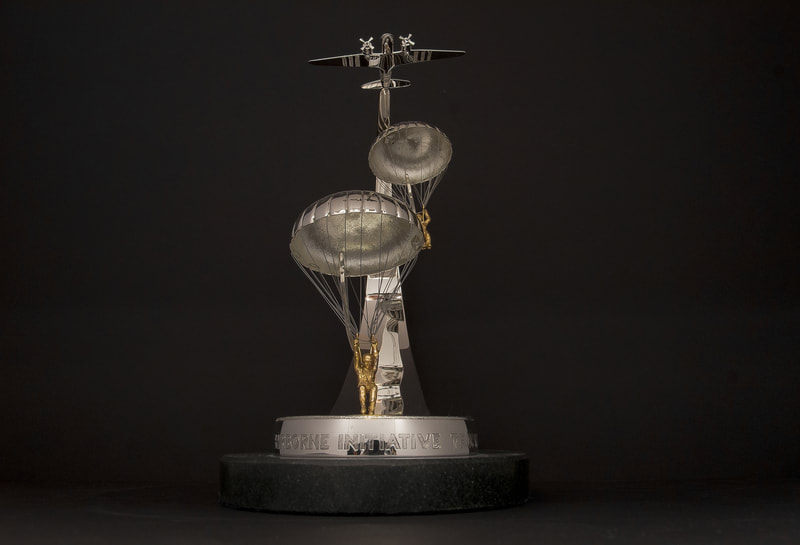 ​In June 2019 the trophy was presented by Paul’s client to a senior officer of the Paras, Regimental Colonel Liam Cradden, who would be transporting the trophy to Arnhem in the Netherlands where it was to be part of the 75th Airborne Commemorations of The Battle of Arnhem ‘Operation Market Garden’.

Paul and his wife, Jacqui were invited by the Para’s to attend these commemorations. In September they travelled by car to meet up with the Paras where they were based in Arnhem and joined in the whole weekend of celebrations as their guests. On 21st September 2019 there was a magnificent air display in which approximately 1500 parachutists of all different nationalities were dropped at Ginkel Heath, the very spot where the battle had taken place, with many other military activities including the Red Devil’s, the modern-day parachute free fall team. At this event HRH Prince of Wales and HRH Princess Beatrix of the Netherlands attended a wreath laying ceremony.

In the evening they attended the Colonel Commandant and Her Majesty’s Ambassador’s Cocktail Party which was held in the Hartenstein Museum where Prince Charles who is Colonel-in-Chief of the Parachute Regiment attended and spoke with many veterans who were in active service. Later that evening they were invited to attend a formal dinner of the Parachute Regiment where the trophy was presented by Lieutenant General Sir John Gordon Lorimer, KCB, DSO, MBE acting commander of the parachute regiment to The Royal Air Squadron who will subsequently award the trophy to any outstanding individual or organisation on an annual basis that show the most initiative in Airborne Services both military or civil. The trophy was awarded in November 2019 to its first recipient being Mark Coreth who was awarded it for taking a flight of light aircraft over the Holy Land and around Jerusalem crewed by members of each of the Abrahamic faiths. The flight was on 2nd April 2019. See YouTube ‘Flight to Hope’.

Paul is very proud to have been given the opportunity to create this trophy and was very humbled by the veterans and current serving members of the Paras who they met and to whom we owe our gratitude, peace and comradeship we now experience with our Allies.